Today I woke up with an amazing mood, full of positive energy! It was raining for 3 days and today the sun finally showed its warm face. Got reason to be positive.

I was thinking yesterday about what to write today and remembered the time when I entered the wrong car. It took almost five minutes to realize that it wasn't my car. Thankfully nobody saw me…

I have an old Hundai Atos. I never lock it because honestly I don't believe anyone will think about stealing it… it's a really old car. But just to be on the safe side, I always park the car next to new, fancy cars, so that even if someone decides to steal a car from the parking lot I left my Atos, the will take preference in a newer and better car. Another important detail to know about my car, is that in summer my driver's window did not close at all. I simply couldn't roll it either up nor down, as the mechanism was broken leaving it was stuck in the middle. My passenger's window was also always left open or half open. But even if I close the window, it never closes correctly, and as a result a gap is left between the door and the window.

This information is crucial to the story, trust me.

It was the beginning of June, a really busy period for wedding planners, as it is a popular time to get married in Santorini. I was working for 14 hours that day, and you can imagine that I was really tired when I finally could go home. I left the wedding venue at 23:30 or later, drove the office's car back where we parked it, hopped into my car, threw my bag to the passenger's seat and took a minute to relax.

It was chilly that night, for me at least, a person who manages to get cold in August in Greece. Knowing that my passenger's window would be open, my first action was to close the window. Imagine my surprise when I found out that it was already closed! I was 100% sure that I didn't close it before leaving to the wedding. I spent some seconds staring at the closed window, while my brain was trying to process the information. "Who is the kind gentleman who saw my open window and decided to close it for me" I thought. Not only this kind gentleman closed the window, but he did it perfectly, without leaving any gap between the window and the door. It wasn't an easy task, so I really appreciated his effort and thanked him.

Then I noticed a small heart hanging next to the window. "Do I have a secret admirer?" I thought smiling to myself (a "smart" thought…) "Could it be my kind boyfriend, who decided to come all the way to Pyrgos to close my window?". That thought was immediately discarded, as he was probably in Akrotiri all day, and wouldn't come all the way to Pyrgos for a window. I definitely had a secret admirer! (again… what a genius conclusion)

A sudden thought came to my subconscious, triggering the first panic attack. I reached for my window -the driver's window. It was closed as well!!! It was impossible to close it!! The window crank handle was broken! I broke it myself!! Did the kind gentleman, my secret admirer, managed to close the driver's window with his own bear hands? Who was that knight of closing strangers' windows??

As embarrassing as it might feel admitting it, the thought that it was in a strangers car didn't even closely passed through my head.

"Someone robbed me!!!" this was the second panic attack. "I knew that was going to happen eventually! Everyone probably already knows that I leave the car open, and someone took the opportunity to rob me. I'm so stupid…secret admirers and stuff… who would ever come to do such a thing for me? But what is there to rob from my car? It has absolutely nothing of value!". Those where the thoughts that passed through my mind at that exact moment.

I grabbed my phone and switched the flashlight on. I turned the light at my car mats. There weren't there. But they weren't missing also. There were mats on the floor, but not mine. My brain popped an error message at that point and refused to function. "What kind of thief would steal my own mats, and replace them with different ones? It makes no sense". I was puzzled. Something wasn't right here… (duh!)

During all summer, I always had a bag with me with clothes, as I was staying at my boyfriend's most of the nights.

Third panic attack! I turned to light the back seat. The bag wasn't there. The robber took my bag with my clothes! Why would anyone take a backpack just with clothes in it? Just… why?? Where is the logic in that?

And then… I noticed a sweatshirt that I failed to recognize. It wasn't mine.

Nothing made sense at the moment. I was baffled! Why would a thief put a great effort into closing my windows, hanging a small heart, replacing my floor mats, taking my bag with women clothes inside, and leave a male sweatshirt. What in the starts was going on?!

I switched my attention the seats! Those weren't the seats my car had in the morning! It wasn't possible for someone to change all of my seats… Suddenly, my inner idiot was pushed aside and the logic part stepped in - "This is not my car!!" … (well no s**t Sherlock!)

I took my handbag, stepped outside the car, looked across the parking lot to find my own car and make sure no one saw me, double checked that it was indeed my car, got inside and drove away.

I still feel kind off embarrassed that it took me so long to figure out the obvious, but hey… a 14 hour working day is no joke! In my defense, I wouldn't expect that there would be another daredevil (or a stupid enough person) who would leave his car unlocked! 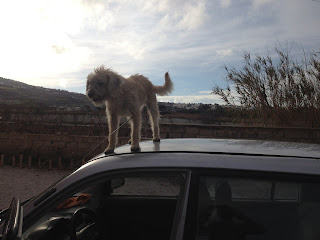 That's all with this story. Keep your cars locked, and if you don't check your license plate before entering the car… just to avoid any misunderstandings J

I don't have a picture to share with you today, so here is a picture of my dog standing on top of my car's rooftop (he thinks he's a cat… or a goat… I haven't figures out yet).

I wish everyone of you a Merry Christmas, lots of love, health, and many - many happy moments!

Have a great day!

Random Saturday #2
Posted by Unknown at 1:48 AM

Treat yourself to older posts