Hope all of you have been well this week, and any surprises you had were pleasant! 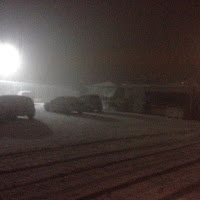 As you probably already know, last Saturday there was a party at Secret Café, which I of course attended! It was great! What you didn't know, is that on the same night, there was a snow storm in Santorini (!!!) which dressed all of Pyrgos in white! While driving to the party I almost forgot that I was on an island in Greece, and felt that I was in a northern country going on a winter adventure!

Never could I imagined, that I would be playing snowball fight in Santorini, or seeing snowmen on everybody's car. For three days, the mountain of Pyrgos, the "Profitis Ilias" where the monastery is, was white. It was magical, and here is a picture to prove it!

A couple of days later it felt like the last days of spring. It was sunny and warm, and nothing reminded on the annoyingly low temperatures of the weekend.

… we need to be more careful with the climate, as the weather makes no sense any more…

Also, this week we had a full moon, and I believe I almost transformed into a werewolf. No, I didn't become all furry, didn't grow a tail, and didn't run on four legs, even after the Saturday's party. I just got the nasty, angry, easily angered and easily crying werewolf spirit... ah, good times!

It was the first time the moon had an impact on my mood, and honestly I wish for it to be the last. I would go from calm to angry to crying to calm again in ten minutes! Everything was upsetting me, minor things would make go "hulk" (I didn't smash anything… not physically at least), and I would cry over a broken biscuit.

This whole phase lasted from Monday, when I realized that I didn't want to leave my house. I was getting worse and worse with every day that passed. At some point, I even started to annoy myself, so I begun to look for a logical explanation to this whole behavior. I didn't find it, of course, until yesterday Katerina told me that on Thursday there was a full moon, and I was probably influenced by it.

It made sense, I accepted the fact, I was happy that I found an explanation, and I'm finally on the road to recovery. Hooray!

If the full moon is not to blame, then the only other logical explanation is that my Anger, Fear, and Disgust were in charge of my emotion control mixer, while Sadness and Joy were trying to bring back my core memories. You know… like it happened in "Inside out" with Riley.

If you didn't understand the reference above, I will kindly ask you to see the movie within the next 48 hours. Thank you!

After this fun and unforgettable week, I want to share the following thoughts with you. If all of a sudden, your loved one or a friend goes coo coo, and if of course there is no medical condition to explain what it is happening, don't start calling him or her crazy! He or she are probably as confused as you are, he or she does not know what is happening or why suddenly all those emotions cannot be controlled, whatever methods are applied. All he or she needs is a hug, a hot cup of chocolate or tea, a blanket and a 10-season series to calm down the nerves and don't let that person leave the house. Don't try to give alcohol… it does not help at all. Be patient, be understanding, and choose your words carefully.

Personally, I'm glad this week is over, as no one followed the instructions above.

Thank you very much for reading, and I wish everyone a great weekend.

Treat yourself to older posts